The Canadian Football League spiked in two opposite ways during Week 19.

It was the highest-scoring week of the 2022 season on the field but the downward spike came on television with the league posting its lowest average ratings so far this year.

After the Blue Jays were swept out of Major League Baseball’s postseason by the Mariners the previous weekend, an ideal scenario was set up for the CFL to thrive on TV but that was far from the case. Yes, the Saskatchewan Roughriders, the three-down league’s best draw, were on a bye. However, during the Riders’ first two off weeks earlier in the season, the numbers did not plummet as much.

The Tiger-Cats dramatic 35-32 win against the Stampeders was highly entertaining, although it did not translate to a large average number on TV. Late games as part of doubleheaders on Friday Night Football can be hit-and-miss in terms of ratings, especially with kick-off coming at 10 p.m. eastern time. It was somewhat surprising that Rider Nation wasn’t tuned in with the playoff implications for their beloved green and white.

Blue Bombers fans were intrigued to watch Dru Brown during his first CFL start. Brown completed 28-of-39 passes (71.8 percent) for 325 yards with three touchdowns but his two interceptions were both returned for majors. If not for those mistakes, the 25-year-old would have recorded a win. Overall he flashed great potential as a CFL gunslinger and his exciting performance helped register the top-rated three-down game on TV of the week.

The NHL has returned to the ice and provided increased competition. The Canadiens were playing at the same time as the Alouettes on Friday night, just like the Maple Leafs and Argonauts on Saturday evening. Montreal lost 3-0 to the Detroit Red Wings which was viewed by 200,000 on TSN2 while the early games on Hockey Night in Canada drew 1,472,600 across Sportsnet channels and the late slate produced 919,800 average viewers coast to coast.

Thursday Night Football between the Washington Commanders and Chicago Bears on TSN and CTV2 came in at 676,200, while Auston Matthews leading the Leafs to a 3-2 win over the Capitals counted 690,500 on TSN the same night.

Monday Night Football’s overtime game won by the Los Angeles Chargers over the Denver Broncos totalled 542,800 on TSN, which was nearly half as much as Monday Night Hockey on Sportsnet. With the Canadiens and Leafs on the ice at the same time, the combined rating was 1,022,600.

(These numbers do not include viewership from RDS, TSN’s French-language affiliate, which has averaged approximately 200,000 viewers for Alouettes games in 2022.) 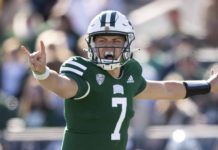