The New York Jets have re-signed Canadian defensive tackle Nathan Shepherd, according to a report from NFL Network’s Tom Pelissero.

Selected 72nd overall in the third round of the 2018 NFL Draft, the six-foot-four, 315-pound defender has played 56 games in the Big Apple, making 71 tackles and 4.5 sacks over the course of his rookie contract. Shepherd was suspended six games in 2019 for violating the league’s performance enhancing drug policy.

The Ajax, ON native began his collegiate career at Simon Fraser University, but was forced to drop out due to financial issues. He spent several years working odd jobs out of football, going unselected in the 2015 CFL Draft, before resuming his career at NCAA Division II Fort Hays State University.

In his senior season, Shepherd made 38 tackles, 12.5 for loss and four sacks, earning Mid-America Intercollegiate Athletics Association Defensive Player of the Year and NCAA Division II All-American honours. He was a key piece on the Tigers team that went 11-0 and won its first MIAA Championship.

Shepherd impressed at the Senior Bowl, NFL Combine – the lone Canadian at both events that year – and drew 16 NFL teams to his Fort Hays State pro day. The result was an unlikely NFL career.

Shepherd’s rookie contract paid him $3.87 million over four years. The terms of his new contract have not yet been reported.

The Hamilton Tiger-Cats currently hold the Canadian’s CFL rights, after placing him on the negotiation list in 2016. 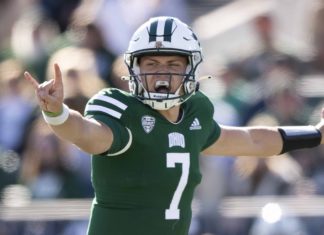