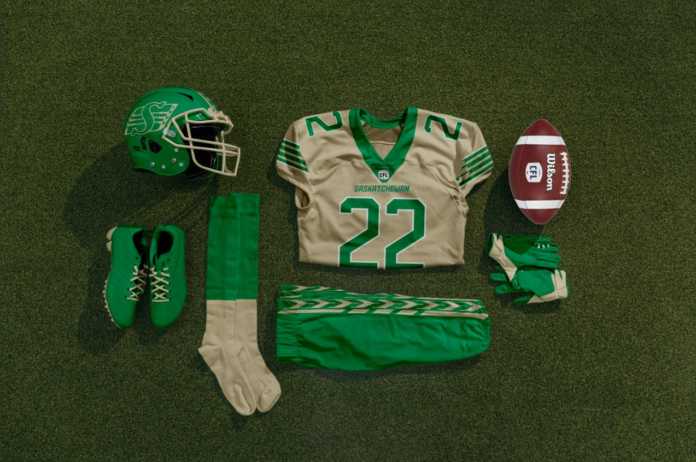 We all get a little bored around the holiday season, but CFL fan Nelson Hackewich found plenty to entertain himself with.

The graphic designer and digital media specialist took the time to reimagine all nine CFL team uniforms — while also taking it upon himself to design one for the proposed Atlantic Schooners — in what he called the CFL City series.

The native of Regina revealed one uniform set a day on Twitter over the Christmas season to rave reviews and 3DownNation has collected them here for you to enjoy in their entirety. Make sure to give Nelson a follow and show him some love for the great work!

Let’s look at them from west to east.

#CFLCity Launches with the #Lions – 1970's stripes – the black base and neck pattern of the 90's – 2019 Numbers and topped off with a chrome orange helmet with the new BC mark. #CFL pic.twitter.com/xfRxVbWiVa

B.C.’s current jersey is all about the orange, but Nelson flips the script to bring back a black base. The old school lettering on the helmet provides a nice touch.

This Stampeders look is crisp and clean, with a design that accents the barbed wire on the helmets and makes the band of silver really pop.

#CFLCity day 3 – The #Elks: 90's collar, 2000's 3 tone numbers, Elks helmet logo used this season VS SSK, use of traditional helmet stripe, worked in the EE mark on the bumper, use of antler mark as a pant stripe. #CFL #AntlerUp pic.twitter.com/FRCwXtwtzj

The Elks just re-designed their whole look in the name change process, but it’s never too early to start fresh. Nelson’s take will keep the fan base happy, bringing back their iconic gold numbers.

#CFLCity Day 4: The Green and wheat. The colour comes from what is believed to be a prototype sweater from 1948 when the then Regina Roughriders were in process of changing their colours – shoulder stripe style is borrowed from 1989 combined with current elements #Riders #CFL pic.twitter.com/4BE6k6DvSe

Based off a 1948 prototype, this Riders’ jersey somehow makes us feel nostalgic for something that never was. It begs the interesting question: are the Green Riders simply too green?

It may be based on a throwback, but that doesn’t stop us from getting Colour Rush vibes from this Bombers look. Look good, feel good, complete the three-peat, am I right?

Nelson puts the ‘steel’ back in Steeltown with this silver look, complete with ‘The Hammer’ emblazoned on the helmets. A perfect ode to the city.

A team so old, they needed two new looks. Nelson goes with the controversial Oxford blue for the more traditional of the two uniforms, before breaking the mold with matte black and gold to honour ‘The Six’.

Day 8 of #CFLCity: Rideau Red – everything borrowed from the glory years, with a current twist. 1960’s style saw blade shoulder stripes, single plaid helmet stripe with front and back numbers, and of course. The stand alone R #Rnation #CFL pic.twitter.com/Pt9QhtGRpD

More red, less black was the rule of thumb for Ottawa. Plaid is tacky, so Nelson keeps it to a minimum for his version of the Redblacks.

#CFLCity day 9: Defend The Island – 1974 Delta style shoulder loops with a nod to the 425 Squadron. 1999, 2-tone collar, Red/White numbers from the 2009 Alt. And helmet stripes from the 2000’s. A nod to all eras with the logo cluster on the bumper and pants #CFL #MontreAls pic.twitter.com/Yhvr9qpATq

This jersey feels like a nod to every era in Montreal football at the same time, completely encapsulating the history of the franchise right down to the hidden past logos.

#CFLCity Day 10: Ready Aye Ready – The connection between the Schooners and the Royan Canadian Navy needs to be strong when launching their brand and they should wear that motto proudly, meaning "Always Ready" #CFL #Schooners pic.twitter.com/xPkEwDgsQx

Well there you have it CFL, the Atlantic Schooners have to be brought into existence. It would be a crime to have a uniform design this nice and have no one wear it!