The Saskatchewan Huskies are one of only two programs in the nation to remain standing and with that comes a berth in Vanier Cup, the first since 2006.

This represents yet another step for a program that’s been on the rise since the 2018 season. Head coach Scott Flory has helped usher in a new era of Huskies football. He has two Vanier Cups as a player, winning in 1996 and 1998, but this Saturday presents his first opportunity to win a national championship as a bench boss. He’s 5-2 in the post-season in his career as a head coach dating back to 2018 — but come Saturday, he’s looking to turn that five into a six.

And after what they battled through last weekend, it’s hard not to dub these Huskies as the favourites. They emerged with a victory in a hostile environment at CEPSUM in Montreal. 5,100 strong were out to support the Carabins. But it was the Huskies who played spoiler, silencing the home crowd after Adam Machart’s 13-yard touchdown run with just five seconds remaining in the game to win the Uteck Bowl and advance to their 10th Vanier Cup in program history.

As was the motto after the Hardy Cup, a Uteck Bowl is nobody’s end goal. When you’ve made it this far, you’re not satisfied with that, they’ve got unfinished business.

In front of them now is Western. The Mustangs took care of their own business last weekend with a convincing 61-6 win over the St. Francis Xavier X-Men — the Atlantic University Sport conference champion.

After a 5-1 regular-season of their own, it’s a fitting opponent for the Huskies. Western’s been ranked inside the U Sports top 10 all season long and they’ll be looking to show why on Saturday in a matchup that presents a rematch of the 2018 Mitchell Bowl — a game Western won 47-24.

Since the beginning of the season, if not even before then, Saskatchewan has been a team with the belief that they can win the Vanier Cup. This Saturday, at last, they’ll be presented with that opportunity.

Machart will forever be remembered for his last-second touchdown in the Uteck Bowl. Now the question is who can deliver the next legendary Huskie moment. 48 men take the field on Saturday, with one goal in mind: bring the Vanier Cup back to Saskatoon for the first time since 1998.

Flory on the match-up with Western:

Machart on the go-ahead score in the Uteck Bowl:

“I knew we needed it, we didn’t want a tie, we wanted a win. [The Vanier] represents two years of hard work. We’ve fought so hard for it and now we have a chance to get there.”

Nyhus on the Uteck Bowl win:

“I’m just so proud of my guys, the way they fought back. The resilience on this team; it was just great to see. It was a crazy last little bit there, but I’m just happy to get the win.”

Riley Pickett on the win:

“It was hard fought and I was just happy the boys battled through it and played prairie football.”

Machart on how he’d describe this Huskies team:

287 – Colton Klassen had 287 all-purpose yards against the Mustangs in the 2018 Mitchell Bowl.

58 – The Huskies have outscored their opponents 72-14 in the second half of their three post-season games, holding a plus-58 point-differential.

74 percent – Western had arguably the best red zone offence in the country, scoring on 17-of-23 possessions during their six regular season games.

Greg Marshall is a 21-time Yates Cup and three-time Vanier Cup champion and he’ll lead Western on Saturday. The three-time U Sports Coach of the Year took the helm of the program in 2006 after a stint as the Hamilton Tiger Cats head coach and has won seven conference titles since.

The Mustangs closed the regular season with a 5-1 record, their lone loss of the season being a 23-21 defeat to the Guelph Gryphons in Week 2.

Since then they have been tough to take down. They outscored their three opponents 113-26 over the course of their three post-season games.

Much has been made about the Mustangs ground game. Keon Edwards led the nation in rushing yards per game and rushing touchdowns during the regular season. Western ran for 469 yards against St. FX in the Mitchell Bowl — 104 of those yards from Edwards on nine carries.

Evan Hillock is Western’s starting quarterback. The Hamilton product joined the program by way of King’s College. The first-year pivot took over the starting QB job after the team’s Week 2 loss and has been Marshall’s go-to-guy ever since. Hillock was named the OUA’s Rookie of the Year in 2021, after averaging 264 yards through the air per game.

The aforementioned Knight won the J.P. Metras Linemen of the Year Award. Knight’s nation-leading 7.5 sacks helped him become the ninth Mustang to win the honour.

Edwards and Knight were among eight Mustangs selected as OUA first-team all-stars, while four more were named OUA second-team all-stars. Four of the five members of the Western offensive line were named to either the first or second team. 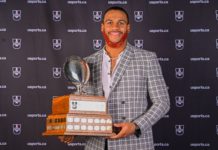