A living legend in the CFL coaching community has returned to the west coast in a new role.

The University of British Columbia opened spring practice yesterday and head coach Blake Nill teased fans with a video on Twitter regarding a revamped coaching staff.

If that coach looks familiar to you, you are on the right path. It appears long-time offensive line specialist Dan Dorazio has made his way to Point Grey, later confirmed by his former player Angus Reid.

Wow! @tbirdsfootball just got 10,000% better. Coach Dan is now in the house! After 25 years coaching up pros, Coach Dan has returned to his roots. He’s the very best there is. These young men will become the greatest versions of themselves under his watch. @CoachKGrabowski pic.twitter.com/PN5X9vvHd7

Dorazio last coached for the Toronto Argonauts in 2019 but is best-known for his role as the B.C. Lions’ offensive line coach from 2003 to 2014 and again from 2016 to 2018. That tenure was interrupted by a one-year stint with the Saskatchewan Roughriders in 2015.

Since beginning his career with the Calgary Stampeders in 1998, Dorazio has won four Grey Cups and produced four Most Outstanding Offensive Lineman award winners. Prior to the CFL, Dorazio spent 26 years coaching in the NCAA.

UBC last won the Vanier Cup in 2015, their first year with Nill as coach. Last season marked a setback for the program as the team struggled to replace star quarterback Michael O’Connor, finishing last place Canada West at 2-6. It was the first time the team has missed the playoffs since recruiting Nill from the University of Calgary.

The flashy hiring is nothing new for the Thunderbirds. In 2018 they gave former Tiger-Cats offensive coordinator Stefan Ptaszek a one-year deal to lead the offence, delaying the Vanier Cup winning head coach’s return to McMaster by a season. UBC hopes this hiring will be more fruitful, with a solid offensive line returning them to the national spotlight. 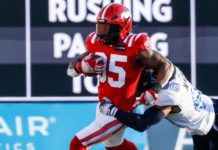