The stage is set for the USports football national semifinals on Saturday, when the last four teams still standing will battle for a berth in the 55th Vanier Cup on Nov. 23 at TELUS-Université Laval Stadium in Quebec City.

The RSEQ conference champion Montreal Carabins (8-2) and the AUS titlist Acadia Axemen (9-0) kick things off at 1 p.m. Eastern (10 a.m. Pacific) in the Uteck Bowl at Raymond Field in Wolfville, N.S.

New national champions will be crowned later this month as the Laval Rouge et Or, who last November claimed their record-extending 10th Vanier Cup title, were upset on home turf by arch rival Montreal in the RSEQ final.

As a matter of fact, none of the 2018 conference champions were able to repeat last Saturday, a first in USports football since 1998 and only the fifth such occurrence since the implementation of national semifinals in 1967 (also happened in 1975, 1971 and 1968). 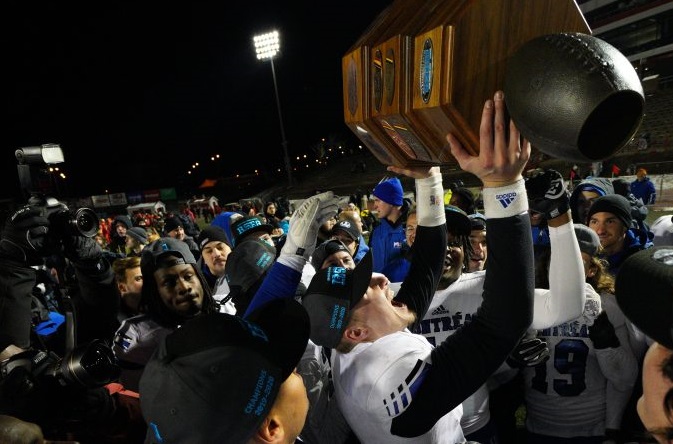 In the AUS, the Axemen outgained Bishop’s by 486 total yards to 158 in a 31-1 Loney Bowl victory to take home the conference banner for the second time in three years. StFX, which claimed the title a year ago, failed to qualify for the playoffs this fall. 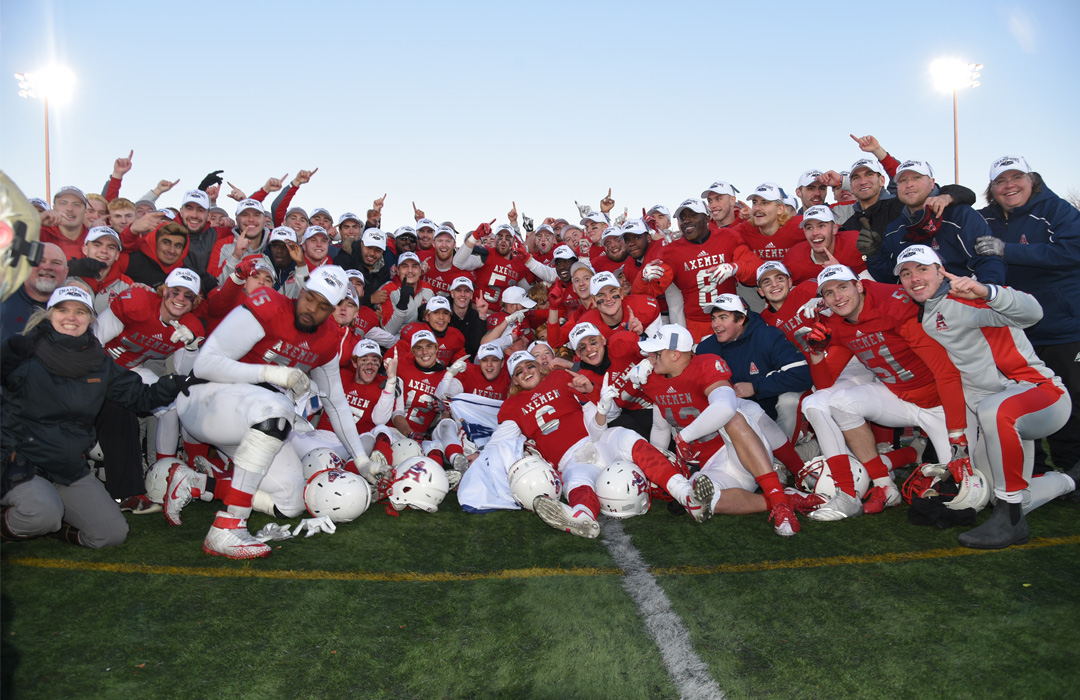 In the OUA, the Marauders held Western’s high-scoring offence to 13 first downs and 229 total yards in a 29-15 road win to capture the Yates Cup for the first since 2014. Entering the contest, Western had won 29 straight games against OUA opponents since the 2016 Yates Cup. 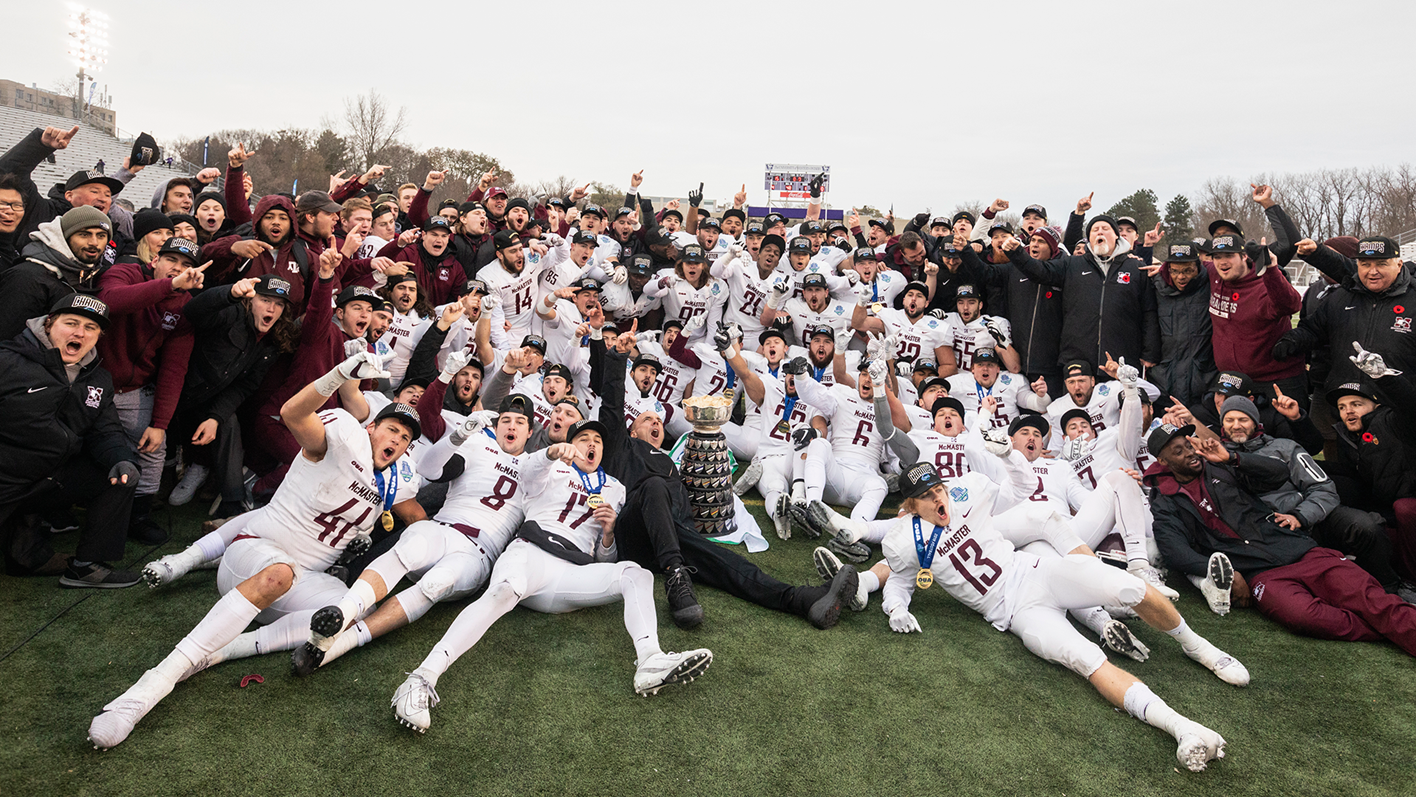 Finally, in Canada West, it was more of the same as the Dinos held the nation’s top rushing attack (221.5 yards per game during the regular season) to 132 yards on the ground in a 29-4 defeat of Saskatchewan. In claiming its third conference title in four campaigns, Calgary avenged a 43-18 loss to the Huskies in last year’s Hardy Cup final, also played at McMahon Stadium. 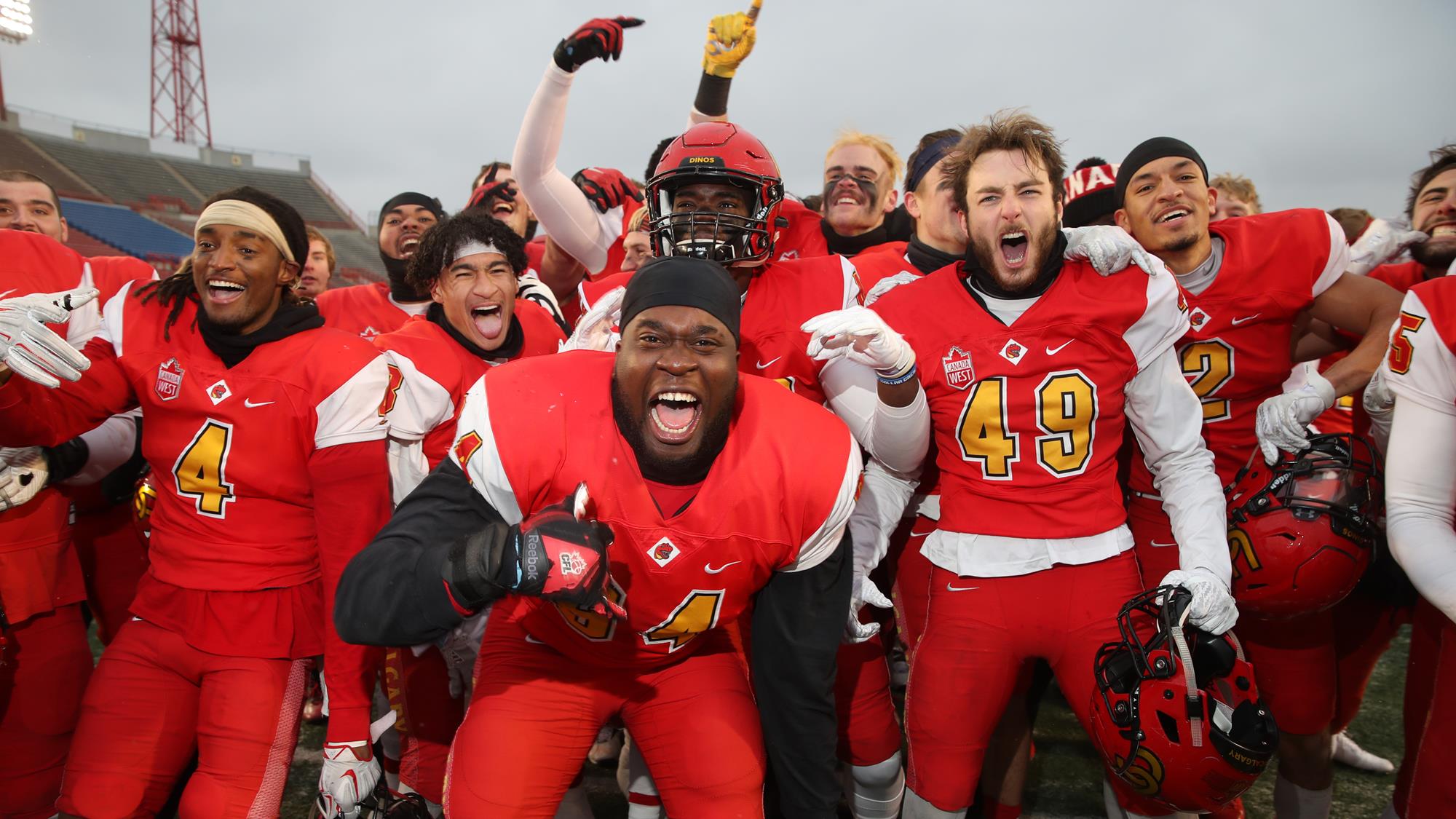 Is this the year the AUS will put an end to its national semifinal drought and make its long-awaited return to the Vanier Cup?

Acadia has looked as good as any AUS team in recent years this season. Coming off the fourth unblemished regular campaign in program history, their first since 1986, the Axemen were the highest-scoring team in the country in league play thanks to their 38.6 points and 482.5 total yards per game (also a USports-high) and were also solid on defence allowing 20.6 points per contest, the second-lowest average in the conference. 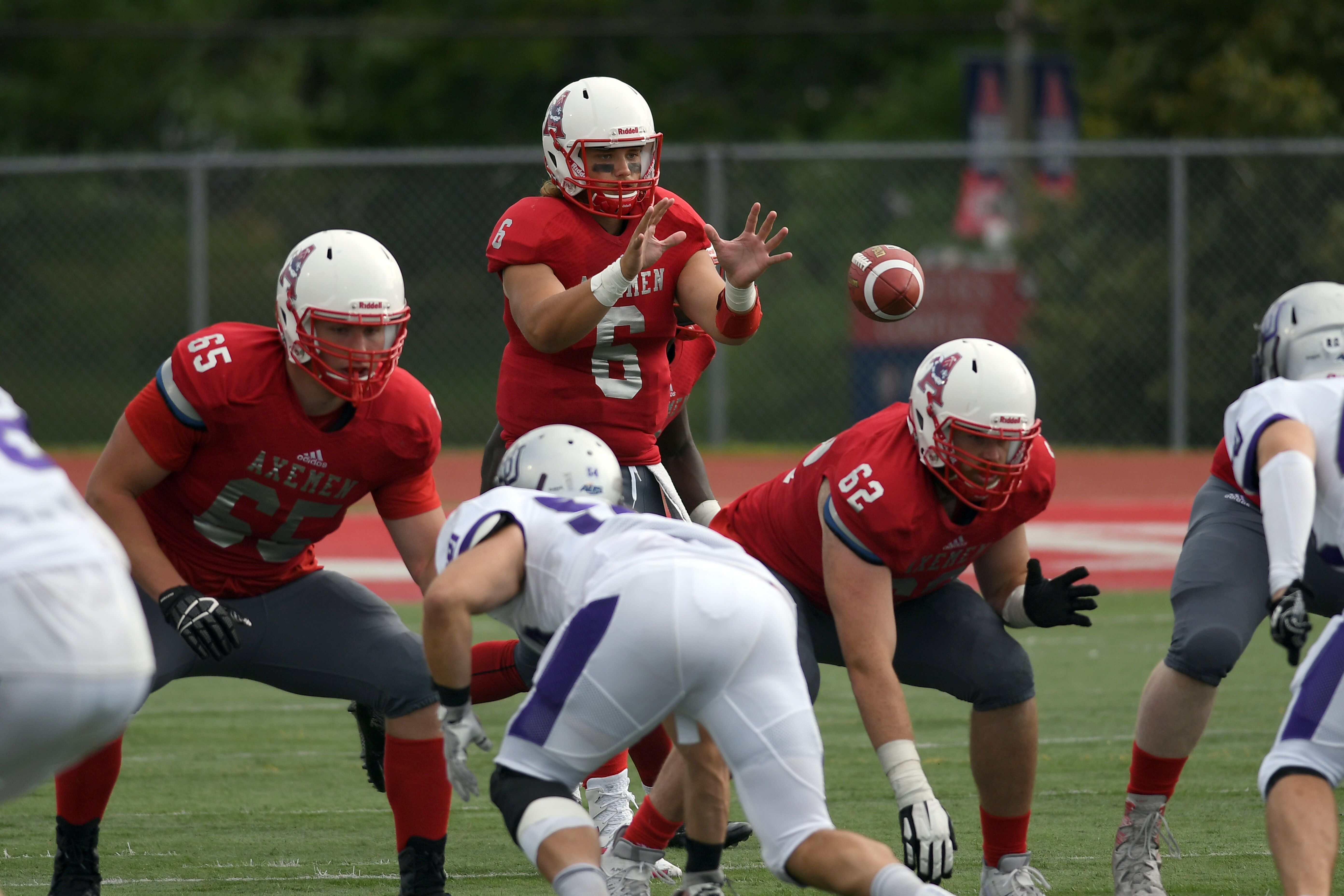 Along with running back Dale Wright, the league MVP in 2017, Guenard, Feltmate and Grant are part of a group of fourth-year seniors who are the heart and soul of the team.

Guenard was by far the best pivot in the AUS this fall with 2,287 yards and 16 touchdown passes in eight league games. Feltmate, who was named defensive player of the year for the second time in three seasons, racked up 58.5 tackles (0.5 off the conference lead), while Wright led the conference in rushing yards (813) and majors (8).

Acadia has lost eight straight national semis since 1981, when the Axemen captured their second Vanier Cup.

“It’s been a good year for us at Acadia and we’re happy to be hosting the Uteck bowl back on our campus. Thankfully, with more than three days rest like two years ago against Western,” said Coach Cummins in reference to the short rest his team had in 2017 due to a delayed AUS final.

“We’re aware of this talent-laden group coming in from U de Montréal and expect this to be a dog fight from kick to whistle. There are not a lot of weaknesses in their game and they are coached very well by some real good people, including my old Las Vegas Posse teammate Anthony Calvillo. In order to be successful against great football teams, it’s no secret, you have to take care of the ball and play well on specials.”

Wright is also eager to get back on the field.

“We’re happy to be participating in a game of this caliber. We’ve worked hard all off-season and summer to get to this point and are excited to continue moving forward to the end goal, the Vanier Cup. The Carabins are a good team, and we’re prepared to fight until the end.”

As good as it has been so far in 2019, Acadia’s offence is about to face by far its stiffest test of the season on Saturday against the stingy Montreal defence.

The Carabins ranked second in the country in league play in both points and total yards allowed per game (11.6 / 270.9) and were the best in the nation against the run, giving up a minuscule 70.4 yards per contest. 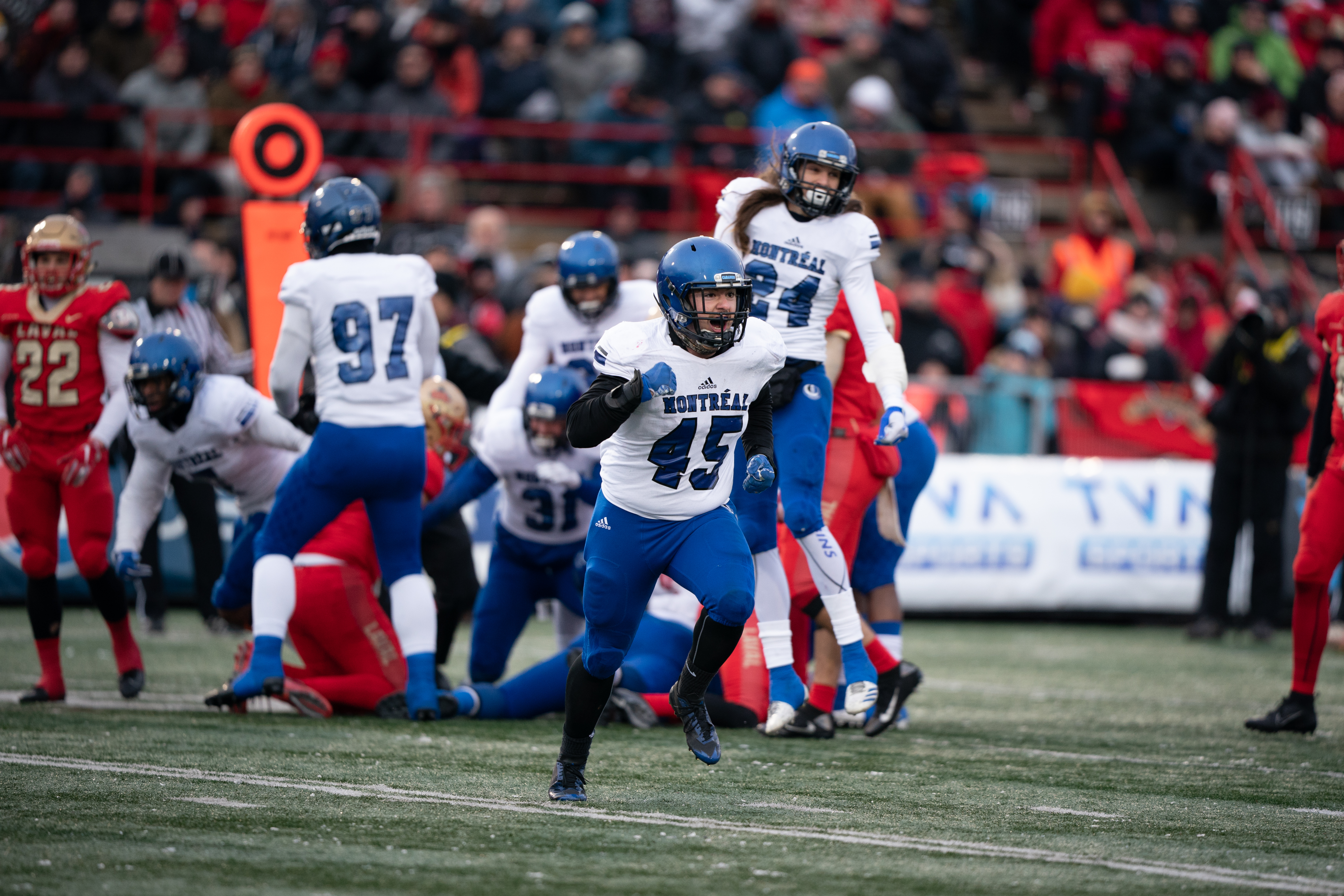 In the Dunsmore Cup final, they held Laval, the second-best rushing team in the country (215.0 yards per game), to 63 yards on the ground and kept the Rouge et Or out of the end zone until late in the fourth quarter. Defensive back Marc-Antoine Dequoy, a league all-star this season and last year’s RSEQ defensive MVP, sealed the win in the third quarter with an 85-yard interception return for a touchdown.

While it was more challenging on the offensive side of the ball for the RSEQ champions during the regular season, with 18.0 points and 319.9 yards per game (21st and 22nd in USports), they seem to have found their rhythm since the start of the playoffs, putting up a season-high 39 points on the board in a semifinal win over McGill before racking up 362 yards against Laval, including 162 on the ground.

“We’re really happy to compete in the Uteck Bowl. Our win in the Dunsmore Cup final was the product of physical involvement and execution, and we hope for more of the same on Saturday against the Axemen,” said head coach Danny Maciocia, who led Montreal to back-to-back Vanier Cup appearances in 2014 and 2015, including the program’s first national title in 2014.

“It will be important for us to win the battle in the trenches on both sides of the ball. This will allow us to successfully execute our game plan against a formidable opponent.”

Frédéric Paquette-Perrault, a transfer from McGill who took a year off from football in 2018, took over as the Carabins starting quarterback in Week 7.

“Last Saturday in Quebec City, the offence executed the game plan really well. The protection in front of me was impeccable, and it will be important to do the same in the Uteck Bowl. The guys in front of me do amazing work, and that allowed me to find our receivers. In order to have success on offence, we’ll also need to get the ground game going.”

The Mitchell Bowl, meanwhile, is a tough one to call as, on paper at least, McMaster and Calgary look to be evenly matched.

By way of comparison, the Dinos scored 30.8 points on average (8th in USports) and conceded 20.8 (2nd CW / 8th USports), boasted the second most productive passing offence in the nation (322.4 yards game) and the top pass defence in Canada West (230.5 per game).

The two storied programs have met only once in the past, in the 2012 Mitchell Bowl, a 45-6 Marauders win in Hamilton. 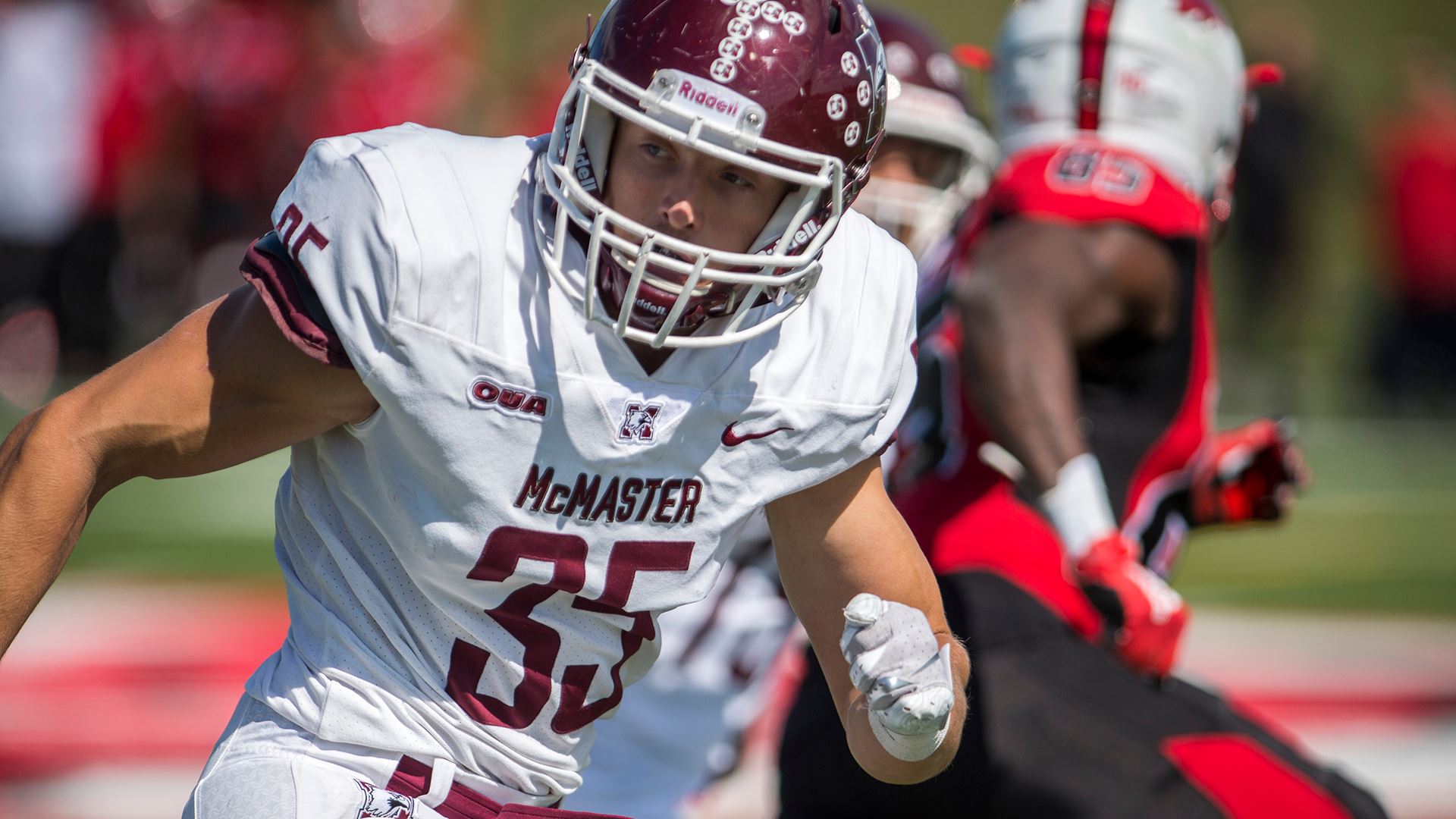 For McMaster, third-year quarterback Andreas Dueck had a breakthrough regular season with 2,431 yards and a 66.4 completion percentage, which ranked second and third in the country, respectively. His favourite target was Tommy Nield, who hauled in 38 balls for 498 yards and three touchdowns.

On defence, third-year linebacker Nate Edwards had a team-leading 45 tackles in league play and was sensational in the Yates Cup final with 3.5 tackles for a loss, including two sacks. Fourth-year defensive back Noah Hallett chipped in with four interceptions in conference action, finishing third in the nation in that category.

The biggest boost to the McMaster lineup, however, might have come in the off season with the return of Stefan Ptaszek as head coach. Ptaszek  was previously at the helm of the Marauders from 2006 to 2015, leading the team to three Vanier Cup appearances in four years from 2011 to 2014, including the school’s first national title in 2011.

“Calgary is pretty talented on offence, and their playmakers are crazy good. (Quarterback Adam) Sinagra’s got a handful of receivers who can all make the big play. It’s a balanced attack. That big offensive line can carve holes, and they can run the ball as well as they can throw it,” said Ptaszek. “Their halfback play is spectacular and might be the best we’ve seen all year. Every level of the defence has solid, good kids on it. The defensive line, linebackers and secondary are all good.

“I do know, though, that the OUA gets you prepared. The best defensive lines in the OUA are going to have you ready for this. Their run game, as good as it is, we’ll have seen something like it across our conference. We’ll have to be who we are. All of the hype and the travel and the great things that go with being in a national semifinal we’ll have to block out, and stay with our routine and prepare for a football game like we always do. We’ll play Marauder Football and let the chips fall where they may.”

Hallett, McMaster’s only first-team OUA all-star on defence, also has a lot of respect for the Calgary offence.

“Sinagra’s probably the most accurate quarterback in the country, so he’s going to present a big challenge. Calgary has athletic receivers, so it’s going to be a challenge for sure, but we’re putting a good plan together. We had a day to get the celebrations out of our systems, and we realize that there’s still more to be done, and we still have to beat some of the best teams in the country.”

A year after winning the Hec Crighton trophy and setting a USports record for passing yards (2,233), Adam Sinagra didn’t put up the same spectacular numbers this season in a more balanced Calgary offence but still reached the 2,000-yard mark despite missing one conference game with an injury. 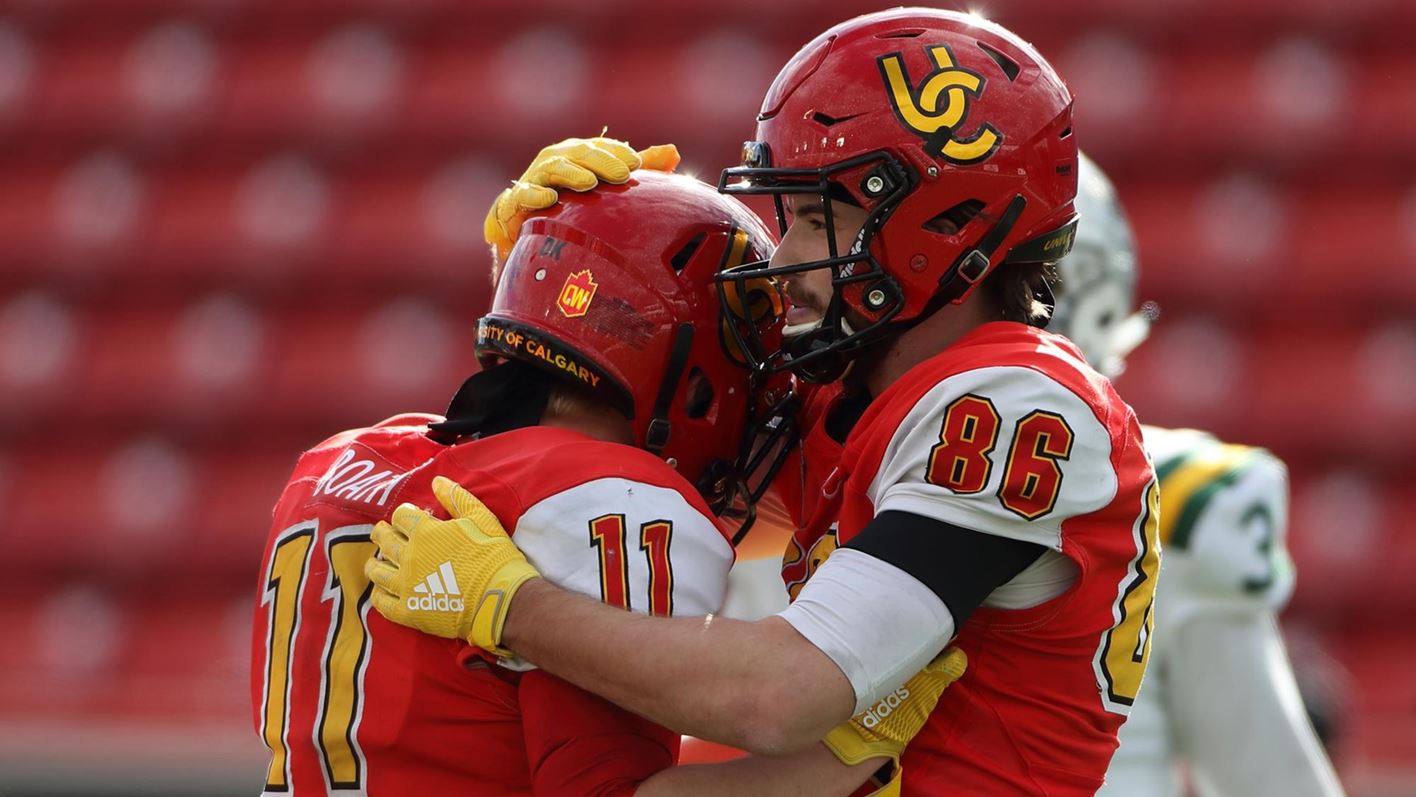 The Dinos’ receiving corps was also hit hard by injuries, especially in the first part of the campaign, but sophomore Jalen Philpot held the fort with 52 catches, one off the nation’s lead.

On defence, cornerback Deane Leonard and linebacker Grant McDonald, both juniors, led the way with four interceptions and a team-leading 40.5 tackles, respectively.

On Saturday, the Dinos will make their remarkable ninth national semifinal appearance since 2008 but despite four Bowl wins over that period, they are still looking for their first Vanier Cup title since 1995, and the fifth in program history.

“It has been a long time since we played McMaster, and they’re a very different team,” said head coach Wayne Harris Jr. “It will be a hard-fought battle – they have a very good defence, have held their opponent south of the end zone, and created field position for their offence. Their quarterback has played well, and they have balanced attack in terms of run versus pass. That’s something that we’re going to have to take care of in order to get a favourable outcome.”

Fifth-year senior Hunter Karl was one of those Calgary receivers who were sidelined with injuries in conference play, being held to only four games.

“They’re going to come out strong. They’re among the best defences in the OUA, they went 8-2 for a reason, and knocked off the best team in the conference for the last three or four years. They’re going to be phenomenal, we’re going to have to come out and give it our best effort. We want to play our game – hold on to the ball for as long as possible, keep our defence off the field and well-rested, and make plays when they’re given to us.”